Fogging with iHP, VHP or HPV 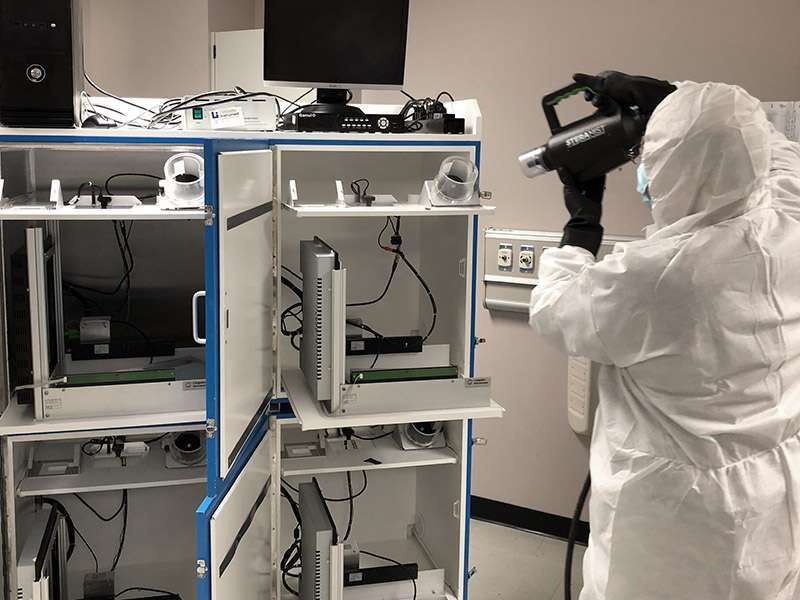 Written by: Domhnall Mc Gowan M.Sc. What is a Sporicide A sporicide (or sporicidal agent) is a chemical disinfectant which is effective at inactivating and eliminating spore forming bacteria. Spore forming bacteria are classed as the most resistant type of...

END_OF_DOCUMENT_TOKEN_TO_BE_REPLACED

It is important to identify the different hydrogen peroxide systems that are in use today, the different abbreviations associated with each and to highlight the differences between them.

HPV refers to hydrogen peroxide vapour and is a term that is used by Bioquell. Similar to Steris, the process flash evaporates 30-35% hydrogen peroxide to create a vapour. However, there is no initial dehumidification and the process is brought beyond the dew point to saturated vapour conditions. The process relies on the formation of micro-condensation on surfaces and for this reason is often referred to as a “Wet” process. The physical chemistry and partial pressures of a saturated hydrogen peroxide vapour means that when condensation is formed, it is at a concentration significantly greater than the original 30-35% of the liquid solution. Depending on ambient temperature and humidity, the actual concentration of the condensate will be in the region of 50-60%. This is an important point when it comes to material compatibility and discussed below.

For each process, typical VHP vapour phase concentrations would be in the region of:

Considering iHP and the discussion of material compatibility, the important point to note is that the concentrations are significantly lower, both in the liquid and vapour form. On this basis it is a reasonable statement that the iHP process is significantly “gentler” on materials than both VHP and HPV.

While globally there have been a small number of reported cases of 30-35% hydrogen peroxide systems causing damage to surfaces, there has not been a single case of iHP causing any damage whatsoever.

← Prev:Dangers to your Cleanroom Cleanliness Disinfecting with the Power of Light →